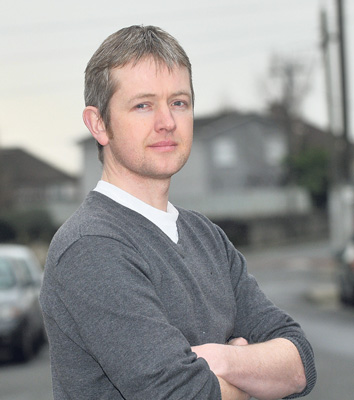 Colm Keegan, poet and author participated in a poetry workshop with transition year students in the school library on the 15th of October. Mr Keegan focused as much on the students wellbeing and their ability to communicate as he did on writing poetry. The incredible openness with which he shared intimate life details created a sense of ease that allowed the participants to open up too. He created a rapport with the students that gave the workshop a conversational feel.

Mr Keegan encouraged individual thought and told us to try not to be “sheep”. This came through when we were asked to read out the poems we had written and it was evident everyone had written from their own point of view. It was a truly enjoyable experience sharing our personal poems with our friends and it gave us a broader view on who our friends really were.

On the 22nd of November Colm returned to a group of around fifteen students to provide a Dystopian Fiction Workshop. In this we were writing stories and talking about the importance of writing as it has been in decline due to the invention of mobile phones and technology. He spoke about how reading is so important and teenagers and kids are too busy playing video games to realise that. We were all tasked to write about the same topic but in our own unique way. The theme was ‘The Authority’. We were given a map of the area, which was a visual representation of a Dystopian Dublin in the near future. We were to write about a battle or an encounter between The Authority and The Squad. We got our short stories finished and Colm took them away and said that he would have them typed up for our next encounter.

Colm returned for the last time on Monday the 21st of January to complete the Dystopian Fiction Workshop. There were eight students at this workshop. He handed our stories back to us and as a group we read them out so everyone could hear. All of us had really different stories and it was fascinating to see how eight students could write about the same topic but were all so different. He helped us improve our stories and they all turned out really well and will be put on the website epicdublin.com.

The workshop took place as part of the South Dublin Libraries Epic programme which was rolled out to schools around South Dublin. The final showcase is on the 28th of March in Tallaght Library. Thanks to Ms Hartnett for organizing the workshop and for Colm coming in to work with us. It was a privilege to be involved.